If you said, the world is getting worse, or neither getting better nor worse, then you are in good company. Only 6% of Americans think the world is becoming a better place.

The thing is, most Americans are dead wrong!

How do most people come to these conclusions? I am currently reading two books on human progress. The first is FactFulNess by Hans Rosling. Hans is the person responsible for converting reams of data from the UN into understandable bubble graphs. In the book he states, "War, violence, natural disaster, man-made disasters, corruption. Things are bad, and it feels like they are getting worse, right? ...At least that is the picture that most Westerners see in the media and carry around in their heads. I call it the overdramatic worldview. It's stressful and misleading." He states that our desire for drama, the media's incentive to give us what we desire, and how our brains are wired (e.g., to make quick conclusions) result in the filtering out of objective information about our world. Some may not think the world is getting better because what they see around them is getting worse. Perhaps they are experiencing a job loss, deteriorating neighborhood, or personal loss. But what we are talking about in this article is The World in aggregate.

The second book is Enlightenment Now (2018) by Steven Pinker. Bill Gates calls this book, "My new favorite book of all time." This book is more recondite and intellectual than FactFulNess but provides an in-depth look at human progress.

The media does not report that "the number of people in extreme poverty fell by 130,000 since yesterday" since there are indeed 130,000 fewer people living in extreme poverty each day. Instead, we only hear about real and disturbing stories, or see real and horrific images. While the news can make a pessimist out of anyone, a review of history can make a faithful optimist out of almost everyone. So, it is where we place our attention (objective data versus the news) that can affect our worldview, making it either overdramatic, or optimistic. We should have faith in the future, because the facts support that faith. This is not blind faith, it is informed faith.

Faith in the future is one of the keys to investment success. This faith is important because when you invest, you are expecting that businesses will thrive in a thriving world. Why invest if you have no faith in a better future? Therefore, we must feed our faith with facts.

How can we all become more informed about the facts that support faith in the future? At the end of this article I will provide some resources to help you accomplish this. In the meantime, I will focus on the two most powerful facts that prove how the world has improved: improvements in extreme poverty and health.

The number of people living in extreme poverty-defined as living on less than $1.90 a day, adjusted for different price levels in different countries and for inflation-has dropped from almost everybody in 1820 to 44% in 1981, down to fewer than 10% of global citizens in 2015 (the last year for which we currently have data). Yes, that is still too many, but this is remarkable progress that will no doubt continue! 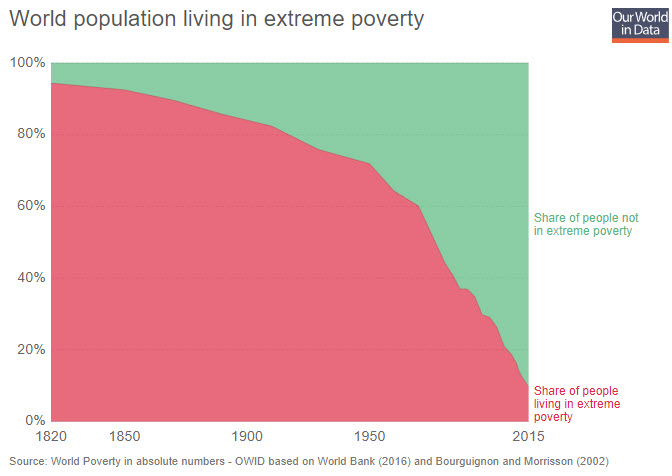 This is even more remarkable than you would think when you consider the world population has increased 7-fold over the last two hundred years. Thanks to democracy, capitalism, free-trade, and the institutions that protect our rights and lives, economic growth has reduced extreme poverty. This occurred even as the population increase should have driven everyone into extreme poverty. Yet, the opposite happened! With this population growth, the world managed to create prosperity and continuously lift more and more people out of poverty.

When looking at health, Max Roser of Our World in Data  says that we cannot appreciate how much better the world has gotten until we fully appreciate how terrible the past was. In 1800, about 43% of the world's newborn babies died before their 5th birthday (see the red area on the left side of the graph). Since then, we have enjoyed better housing and sanitation, better nutrition and more available food (which also made us smarter and taller), plus the germ theory of medicine, antibiotics, and vaccines. Today, only 4.3% of newborns die before the age of 5. Yes, that is still too many, but progress indeed. 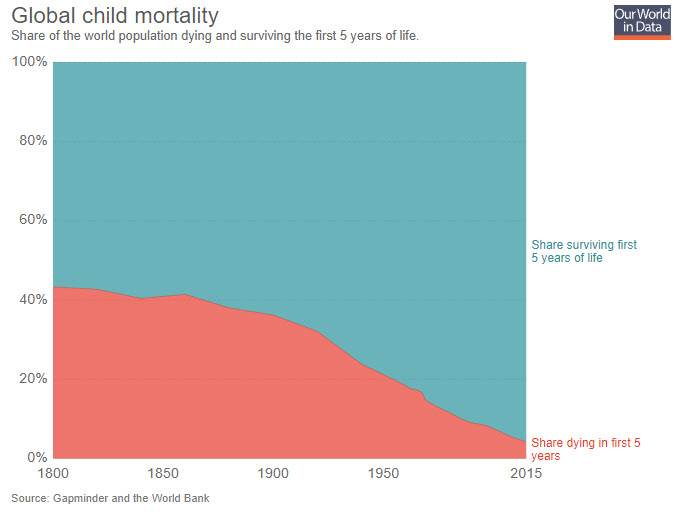 You see, the world is becoming tremendously better in a variety of ways that are happening too slowly for us to appreciate or for reporters to report. If you like the idea of breaking away from a pessimistic world view, I would suggest the following resources to feed our faith with facts:

These resources help us to take a step back from our overdramatic worldview by looking at actual human progress over the long-term.

Despite the past and anticipated future setbacks, the human species seems to be doing a great job of improving its conditions and making the world a better place.