In my last blog post titled Opportunitic Portfolio Rebalancing (Part I), we discussed the basics and benefits of rebalancing. Now, let's discuss the mechanics of implementing a rebalancing program.

Portfolio rebalancing may seem simple at first glance. Every year simply sell/buy what is necessary in order to bring your allocations back to their starting point.  However, unlike the simple examples above, clients own a multi-asset class portfolio of many different underlying investments (not just “stocks” and “bonds”) that are all bouncing around.

Simply selling/buying each year what is necessary to bring the allocation back to target is a strict time-based rebalancing approach which is not optimal. First, it may easily miss opportunities to take advantage of volatility. For example, referring to the visual on the next page, let's say you rebalance every December, but during the year (say in June) one asset class soars while another plummets. However, by year end, they are back to where they started. You then go to rebalance and find there is nothing to be done.  However, if you had watched and rebalanced in June, you would have benefited from the volatility by selling one asset class while it was up, and buying the other while it was down.

The problem with time-based rebalancing is that the dates chosen for rebalancing are arbitrary, and thus you cannot possibly expect to catch the most lucrative buy-low/sell-high opportunities while they are occurring. For example, most time-based rebalancing probably missed the big buy-low opportunities during key events like Brexit (6/23/2016), or the bear market in December 2018. Second, rebalancing right back to your target allocation is too rigid and it increases the total number of trades (and associated costs such as commissions).

Thankfully there is a solution that allows us to both capture the volatility of the uncorrelated asset classes, yet also minimize trading. For most clients, we implement what is known as recurring tolerance band rebalancing. This means, rather than rebalancing based upon a time interval, we rebalance based on a target for how “out of band” each asset class (or investment) is allowed to drift before reining it back in again.  This is also known as opportunistic rebalancing that came out of the research done by  Gobind Daryanani (CFP, PhD) in his groundbreaking paper “Opportunistic Rebalancing: A New Paradigm for Wealth Managers” in the Journal of Financial Planning. 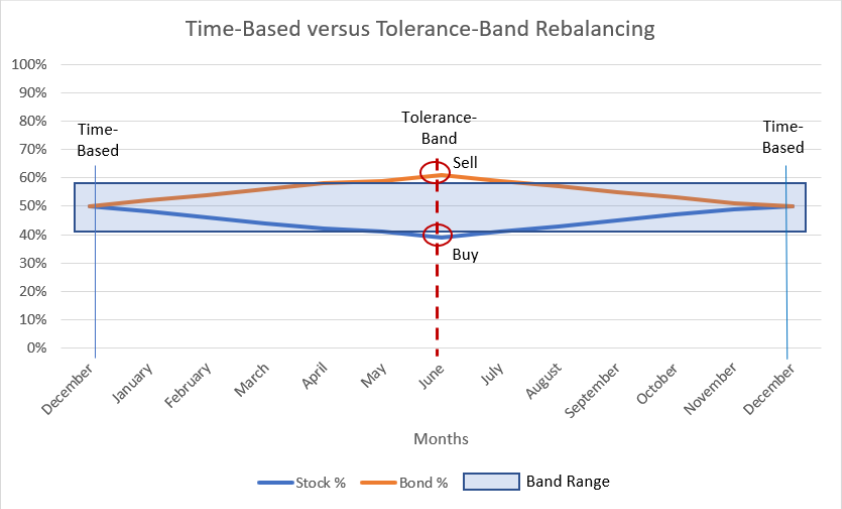 Think of each investment in your portfolio as a rubber band. Each rubber band has a different thickness, size, and therefore flexibility. We want our investments to stretch a little, but not break. When they do stretch too far on the upside, we sell (high) before they break, and re-allocate the proceeds to the bands that stretched too far on the downside.  So, if your stock allocation is supposed to be 50% and your band stretch limit is between 40% and 60%, you only rebalance once the stock allocation exceeds 60% or drops below 40%. This both minimizes trading, but also allows stocks to run a little before taking profits.  The other major benefits of using tolerance bands is it allows for frequent “looks” to see if one of your many investments or asset classes has exceeded its band. In a globally diversified portfolio of multiple non-correlated asset classes, it is important to look frequently as one of these assets may fall out of its band as a result of short-term volatility. To catch these transient market moves, your portfolio needs to be checked on an ongoing basis. These frequent looks don’t necessarily result in frequent trades, but they do result in identifying and trading an out-of-band investment at an opportune time. In simple terms, it allows us to more frequently capture the sell high/buy low opportunities.

As Dr. Daryanani states in his paper, “This “opportunistic rebalancing” approach not only controls portfolio risk but also provides significant return improvements by capturing sporadic buy-low/sell-high opportunities as asset classes drift relative to each other. We will show that, with frequent looking, rebalancing return benefits are significantly improved compared with traditional quarterly or annual rebalancing. For example, by looking frequently but rebalancing only when needed, the average rebalancing benefits are shown to be more than double the benefits of more traditional annual rebalancing.”

In summary, opportunistic rebalancing is designed to instill the discipline needed in order to maintain our desired portfolio risk/return, while at the same time potentially enhancing our portfolio returns.