Paying for college is a partnership!  It is not a test of endurance.  It is not an obligation.  It should not take precedence to saving for retirement. It should not result in your own personal bankruptcy. Paying for college is a partnership shared by those vested in its benefits!  I will never forget a joint meeting with a single mother and her son.  This mother was willing to sacrifice her retirement savings to pay for her son’s college. There is no arguing with a mother looking out for her “cub” (as my wife will say)!  However, I turned to her son (who was adrift and doing poorly) and I asked him if he would be going to college if he knew that he had to pay for any of it.  The answer came swift…NO!

Everyone must be committed to the value of an education, committed to the fact that it is a partnership, and understand that it should not jeopardize one’s financial security.  Because the cost of college is a more immediate problem than retirement, and it involves those precious “cubs”, many parents fund college at the expense of their own retirement.  This leads to disastrous consequences. Your retirement plan must be in place and in process of being executed PRIOR to committing to paying for college costs.  It is indeed rare to find a family that has fully funded their retirement, living the lifestyle they desire, and saving the full cost of college in advance. Therefore, planning must be done!

Planning is all about creating an image for the future and the path to get there. If you are planning on remodeling your kitchen, you envision the completed project, estimate the costs, and continue to revise the project until the end result is in synch with the amount that you can afford to spend.  Then you begin to work on the list of things you have to do to get to that completed project in the future.  You plan even though you can’t estimate every cost in a remodeling project due to delays or unforeseen circumstances.  You also can’t nail down the many uncertainties related to the final out of pocket cost of college.  However, for those who try to put some numbers down, or try to visualize the end result keeping it in synch with what is reasonable, they will make much better decisions than those who don’t. In this article, we will go though a fictional (yet realistic) visualization of one family’s plan to ensure that their son’s college gets paid for. 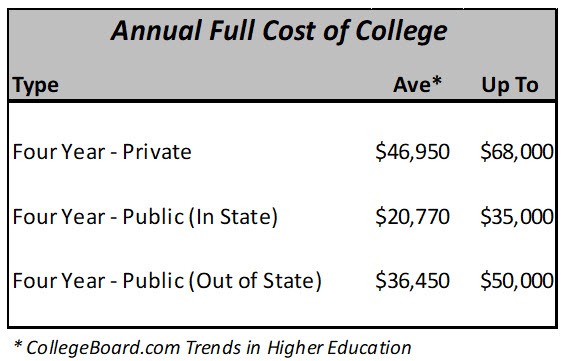 College is expensive.  The average cost of a four year public, out of state, tuition is about $36,500/year. This is the total cost, and therefore includes tuition, room, board, fees, etc.  It is this number you must recognize, and not simply the cost of tuition alone.  However, this also won’t likely be your gross annual cost since the gross cost may get reduced.  First, the school itself may not charge you the full sticker price.  Why?  Many schools have empty seats to fill and may be willing to discount their costs in order to fill these seats. Many schools also want to attract diverse students, or to compete with other colleges for desirable students. Second, you may obtain some free money (you never know)!

However, since you don’t know what the actual net annual cost will be, you must make some reasonable assumptions based upon your child, and where you may encourage them to attend (in-state, out-of-state, private, public, community college, etc).  There are many plans that can be created to cover the cost of college that will vary based upon your family values and your ability to pay.  Let’s go through one such example for a couple that has one child and are having some difficulty finding a way to cover the cost of college for their son.

Let’s assume they want to plan for a cost of a $36,500/year school for their son for four years. First, they need to decide how much of the costs they will bear personally versus others.  Paying for college is a partnership.  Some of these partners may include their children, parents, the government, or even a service organization such as the Coast Guard.

Let’s assume in our example, that these parents think it is logical to have their son finance one year of the full cost of college through his own future student loans. After all, that is what they did!  Perhaps they just want their son to “have some skin in the game”. So, their son would start his career with a student loan of about $35,000 (in today’s dollars) – about the cost of a new car.  In fact, the average student loan debt in 2017 year was $37,000.  While some would never consider the thought of having their son finance a portion of the college costs, they should keep in mind that they can always elect to pay off the loan for their son anyway.  In our example, these parents have some flexibility that others would not have. They can pay it off if they want and can afford to. However, there is no obligation, if they can’t.

Second, these parents may expect their child to earn some money for college prior to, or doing, the school years. These earnings could be used directly to go towards the cost of college. It is certainly possible for a college student to earn about $35,000 over a four-year period. In fact, for this article I looked at my own Social Security earning statement to see how much I made during my college years and it amounted to $32,681 (converted to 2016 dollars).  These earnings were also almost exclusively summer employment.

Assuming now that their son will finance one year of college, and also cover one year worth of college costs through employment income, this leave two years left for which these parents will be directly responsible.

Most parents have employment income and can cover a portion of college expenses out of this income. Typically, college occurs during one’s peak earning years; or perhaps a spouse returns to the workforce at this time.  This creates some additional available income. Furthermore, many parents are already paying for private school out of their current income. This private school tuition will simply convert to tuition payments. For the sake of simplicity (creative license!), I will assume that the parents in our example have additional available (after tax) income of $8,750/year.  If so, then over four years ($8,750 * 4 = $35,000), they will have the ability to pay for the equivalent of one years’ total tuition cost out of cash flow.

Now, they have one year left to cover. Since they are planning to pay these costs without debt, they will forgo considering taking home mortgage debt or other loans. They will have to save for it.  How much will they have to save each year in order to pay for that remaining year of college?  Depending on how many years they have to save and the rate of return of the saved dollars, it would be similar to one of the amounts shown in the table to the left. Obviously, this is only for one child. These results assume that the savings amounts increase with inflation each year and that the cost of college rises 1.5% more than inflation each year. You will see a higher assumed return with additional years until college due to the ability to take on more risk in the desire for a higher return.

I would guess that most clients would be able to work this type of saving amount into their budget.  If not, then they should reduce their lifestyle to free up the savable dollars.

So, paying for college is possible, especially when everyone is committed to the value of an education, committed to the fact that it is a partnership, and understand that college savings should not jeopardize a retirement savings plan.  Obviously, there are an infinite number of ways an image for a college plan can be visualized.  Regardless of how, once done, the path will be clearer, less frightening, and much more likely to be achieved, than with no plan at all.