Democrats on the House Ways and Means Committee released their tax agenda on September 13th. The next step is for the proposals to be debated in Congress and finalized in the weeks to come. However, it is likely that the end result will be similar to these proposals, therefore, it is time to review the major changes.

•    Income taxes are not changing for those with taxable income below $400,000 (single) and $450,000 (married). This can be easily seen in the graphic below which shows the current and proposed tax brackets side by side for a married couple filing jointly.

•    As can also be seen below, taxpayers with income over $450,000 will see much higher marginal tax rates and therefore will be paying more tax.

•    There is the return of the 39.6% ordinary income tax bracket which existed prior to the Trump tax cuts (enacted in early 2018). If enacted, 39.6% will be the new top ordinary income tax rate beginning in 2022. Note in the graphic that this tax rate does not currently exist.

•    The 37% tax bracket has been eliminated under the proposals and has been replaced with the 39.6% bracket, but with exposure to this much higher bracket at much lower incomes.

•    The proposal also compresses the existing 35% bracket. In other words, more people will be exposed to these higher tax rates more quickly with less income. Note how narrow this band of income is on the proposed left-side column. 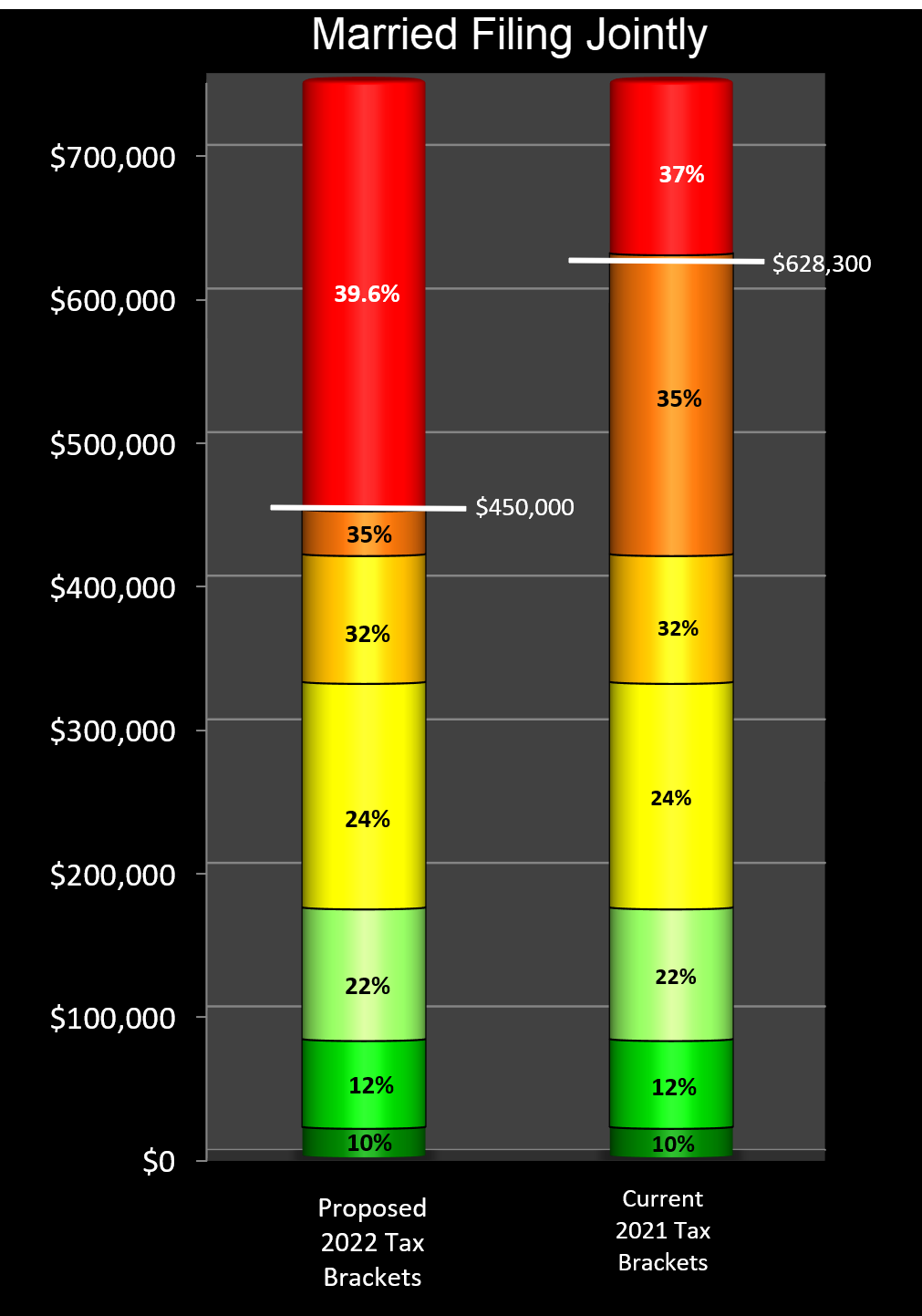 •    For folks over the $450,000 thresholds, capital gains increase from 20% to 25%. While unpleasant, recall that President Biden's original proposal in the American Families Plan included a top capital gains rate of 39.6%!

•    The proposed change to the long-term capital gains rate would be immediate. In other words, you would not be able to harvest unrealized capital gains now in order to avoid the higher rate.

•    One goal is to close "loopholes" used by the wealth such as the strategy of making non-deductible IRA contributions and then converting them to a Roth IRA (aka, the "backdoor Roth") may be eliminated starting in 2022. The same goes for the "mega backdoor Roth" strategy for the after-tax funds in a 401(k) plan.

•    Elimination of Roth conversions for folks over the income thresholds...but not until 2031!

•    The gift and estate tax exemption amounts would effectively be cut in half starting in 2022. That would still be over $5 million/person, though.

It is important to recognize that this proposed legislation is not yet final. We'll continue to monitor this legislation as it works its way through Congress, and we'll post an update when this becomes law.